As the Roman Empire starts to collapse from within, one man seems to understand what is happening. He is Pelagius, a charismatic philosopher from the province of Britain, now living in the imperial capital.

In this evocative tale which echoes down to the present day, Pelagius must race against time to establish a new way of thinking before Rome is overrun by the Barbarians …

Paul Morgan’s dazzling novel draws on the dramatic true story of Pelagius, as told by his former secretary, Celestius, now an old man living in exile. As Celestius recounts their adventures together, and the vivid sights and sounds of a civilisation under siege, he uncovers at last the secret of Pelagius’ ‘book’, concealed in the most mysterious language of all.

With vivid characterisation, brilliant description and understated wit, The Pelagius Book is a novel of friendship and betrayal, of power and intrigue – of ideas, and hope. 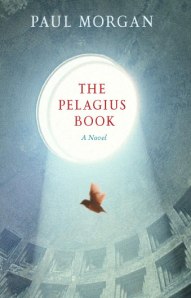 7 thoughts on “The Pelagius Book”